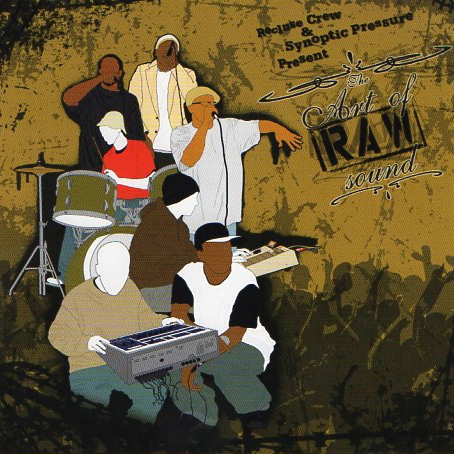 Soothing and funky hip hop albums have been thin on the ground lately, but if you’re the kind of person who finds notions of a bullet proof vest a little ridiculous, then this mergence of Finland’s Recluse Crew and Minneapolis’s Synoptic Pressure could be just your thing.

Putting macho posturing aside for more cerebral flavours, The Art of Raw Sound harks back to the days of heady hip hop creativity, when Native Tongues had a finger in every pie and J Saul Kane was the daddy. The press release for this record lambasts what’s quickly become the tiresome face of hip hop, and here two disparate crews come together with the aim of putting things right.

Intelligent rhymes mixed with surrealist vibes, laid-back grooves with hard-edge moods, The Art of Raw Sound is a diverse trip back to the days when having fun could be informative and, well, fun. A jazz hall groove opens the exquisite Stress Free, where the Synoptic posse (including DisputeOne, Lojik Reazon, Mikchek and Live Wire) serenade their parents in a story of hope, rebellion and the overcoming of adversity, which for the current hip hop generation involves a warped sense of self similar to that instilled in young teenage girls brought up on a diet of Just Seventeen, only with free arms instead of lipstick.

The Art of Raw Sound has a dark side too, but it’s not one that revels in self-hate, but rather looks for ways out. There’s a great sense of rebellious narrative running right through the album, and as well as bouncing with rhythmic glee, its versus speak in poetically profound tones.

The Recluse Crew and Synoptic Pressure collaboration is a thrillingly straight-laced affair, but with that mischievous sensibility that’s the lifeblood of alternative rap. Hip hop was always at its best when in the realms of the sanely insane rather than the dogmatically reactive, and The Art of Raw Sound is a timely reminder of its unadulterated, quirky and spontaneous charm. Irresistible.